“On May 29, 1865, President Andrew Johnson announced his Proclamation of Amnesty, whereby most former Confederates were to be pardoned and recover any of their lands which might have been confiscated or occupied.”

Been In The Storm So Long Chapter Eight: Back to Work: The New Dependency, Page 404.

Rev. Ulysses Houston, 9th pastor of Third African Baptist Church in Savannah, Georgia and one of 20 Black ministers who met with General Sherman. After Sherman signed Special Field Order No. 15 Houston led 1,000 freedmen to claim lands on Skidaway Island where he became the “Black Governor.” During Radical Reconstruction Houston was elected to Georgia’s legislature, eventually introducing a bill that established Savannah State University.

America’s self praise locomotive chugs along—avoiding the honesty of our U.S. heritage—fully fueled to stir up

Books like U.C. Berkeley Professor Leon F. Litwack’s Been In The Storm So Long: The Aftermath Of Slavery certainly bring emotional difficulty—understandably for anyone.

But for Blacks today the subject is especially an excruciating read and Litwack’s presentation is no exception. Slave reality laid out so starkly shows why this matter makes Afro-Americans become so unhinged; and why older Blacks in particular—when the 21st century is supposedly so historically removed—still staunchly avoid revisiting slavery’s gruesome operation details.

156 years later Blacks are still haunted by the air of absolute powerlessness—community conditions have hardly changed. 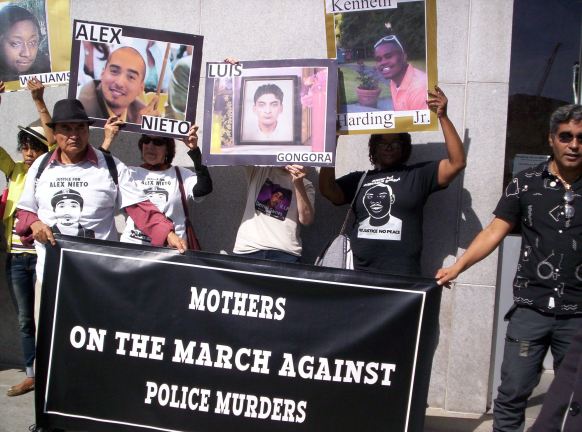 A San Francisco community press conference on the steps of the Criminal Courthouse calling for Cops who’ve murdered unarmed Bay Area citizens to be tried and convicted. October, 7, 2016. photo by Adilifu Fundi.

It’s a dizzying burden today’s white culture can conveniently deny—or simply choose not to carry; especially since whites themselves guard the controls—distorting narratives, hiding the story (or, not talking at all). Add something else: white politic runs every aspect of America’s system itself.

Here, Litwack reminds us whites do step out of that pack. In my vividly showing slavery reparations today are not only valid—but tragically overdue—I’m agreeably following the professor’s advice:

“…to engage…[assisting the reader’s position to] see and…feel the past in ways that may be genuinely disturbing…how a study…may teach as many ironies…as it does clear lessons.”

And Been In The Storm does duly confirm Lee’s logo proposal—the concept of ex slaves receiving “forty-acres and a mule” was no imagined fluke. 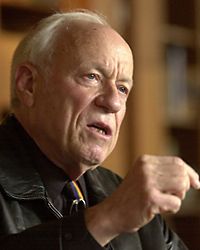 Professor Leon F. Litwack of the University of California at Berkeley.

“…[January, 1865, General] Sherman issued Special Field Order No. 15, a far-reaching document that set aside for the exclusive use of the freedmen…land abandoned by Confederate owners…granting black settlers ‘possessory titles’ to forty-acre lots…Congress made the newly established Freedmen’s Bureau the custodian of all abandoned and confiscated land (seized for nonpayment…or belonging to disloyal planters who had fled)…ex slaves…could pre-empt forty-acre lots, rent them…and purchase them…at a fair price…If the Bureau had implemented this provision and if blacks had been able to accumulate the necessary funds, some 20,000 black families would have…the means for becoming self-sustaining farmers.”

“Thousands of ex-slaves had been placed on forty-acre tracts under Sherman’s program, the earlier experiments…persisted into 1865…stories of individual and collective success by…black settlers…would seem to have assured…expansion of such projects…Federal policies…had not been long-term commitments but [nefariously]…designed to keep [freedmen] working on the plantations…away from the cities and the Union Army camps.”

Sherman’s march through Atlanta to the sea (plus the North’s subsequent Southern “occupation”) did of course immerse him in catastrophic slave reality. This dovetailed another serious issue:

Fallen Confederate leadership, plus their public supporters, absolutely was “traitors” (arguably the nation’s most egregious violation) punishable by death—thousands of U.S. bodies lie blasted in the wake of Rebel “treason.”

And “execution” was a Union option definitely taken very seriously by Southern secessionists.

It was a prospect taken so serious that slaveholders who hadn’t relocated slaves (hoping to ride it out and salvage their expensive “human” chattel) actually fled massive plantations—running for their lives; owners abandoned slaves to carry on (without overseers) doing what slaves knew best—handling all the operations themselves. 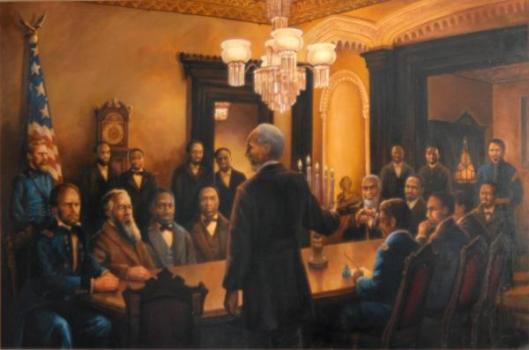 Although former plantation owners schemed desperately, until the bitter end—to convince slaves and themselves that Blacks were witless, animal level “dependents”—slavers got a heart stopping surprise:

Freedmen ingeniously seized and claimed those abandoned properties, heeding opportunity without hesitation—shocking the entire system itself!

These new ex slave occupiers correctly believed they had the right to now own the land; their enslavement had actually created those so-called “self-made” moguls; slave “knowhow and labor” is what brought America into lucrative, world competitive fruition.

A January, 1865, event in Georgia solidified the freedmen occupier’s belief:

A commemorative plaque marking the signing of “Forty-Acres” Special Field Order No. 15 stands at the Green-Meldrim House in Savannah. General Sherman met with Black leaders at this site.

Designated land for total self-sufficiency is the only means to ensure uplifting the Black “race.”

Total “social equality” is the absolute goal and being beholden to whites will not achieve it—in short, whites cannot be trusted. 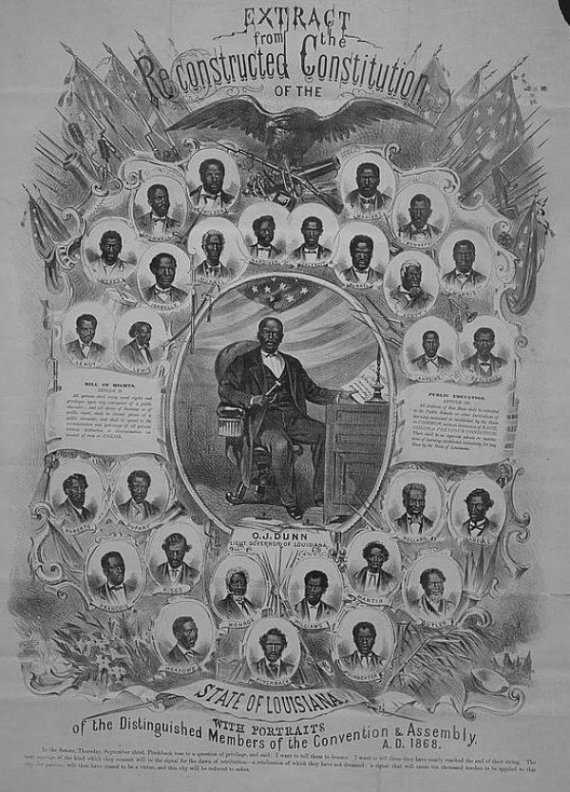 Portrait of the first Blacks entering the Louisiana State Legislature in 1868, elected during Radical Reconstruction. Lasting from 1867-1877 its elimination nailed the political door shut over the next century for Blacks.

In April Lincoln was assassinated and in the fall of 1865 Johnson had thoroughly eliminated Order No. 15. (Confederates celebrated wildly—already having received Johnson’s amnesty). Cunning seditionists got back their ruthless authority and lands—they stripped freedmen of those occupied estates and then employed far reaching insidiousness:

Whites went about destroying other Black’s makeshift hovels and shanties—these were outside of cities and away from plantation sites; ex slaves were now unscrupulously forced back under the traitor’s full monopolizing survival dependence (for shelter and work)—in herds.

Hence a key chapter in Litwack’s book is titled Back to Work: The New Dependency.

Outright campaigns were launched to instigate violent racist hatemongering in the white populace—it crammed the chaos of racial un-resolve (riding on systemic deception) well into our times—diabolically these campaigns worked to utterly and profanely distort “truer” definitions of humanitarian “morality.”

Social and economic racial disenfranchisement “policies” were quickly passed (starting with the Black Codes) to vaporize any notions that slavery’s wrongs would ever be righted—they’ed only be expanded under that cloak of perverted white “morality.”

It brings me back to how clearly “Slavery Reparations” must be understood in our times.

Yes, today’s foes are that same past breed of governing guard dog—modern legislators (and a sold-out populace) who now widen that cloak of perverted “morality.” They’ve been long groomed to drive the U.S.’s enduring heritage train—literally claiming an image of nobility that loudly shouts they hold justice backed by god!

And their fraudulent image still wields a powerful weapon: its called moral “altruism.”

Moral “altruism” is defined as:

The mere notion, or idea that a thing is “noble”—where one “goes through the motions” of showing they have noble intent (altruistic)—claiming its for the greater good (moral).

But “altruism” only means the intent—not a guarantee that what’s pushed is at all benevolent (meaning a thing could be “altruistically” promoted—for the greater good—that’s in reality quite destructive—or, absolutely immoral).

So guard dog legislators tactfully use “altruistic” authority images as a weapon to actually stifle social change—gaining “moral” visual support to pass immoral bills—sealed with what also became a method to cause public embarassment:

Former Army Ranger Rory Fanning who served two Afghanistan tours protests at a Chicago Cubs baseball home game in support of Kaepernick (at left) who came under media attack. Fanning famously brought attention to the military cover-up of Ranger hero Pat Tillman’s death (by “friendly fire,” not the Taliban) whose unit he’d served in. Fanning (who finally left the army as a “conscientious objector”) also raised money for the Tillman Foundation by walking from shore-to-shore across America in 2008-2009, chronicled in his book “Worth Fighting For.” Tillman had resided in San Jose, Ca.

Former San Francisco 49er football player Colin Kaepernick knows this all too well: rejecting that shaming heat he persistently took a knee—keeping attention during the national anthem on Black lives destroyed by America’s system—while most Black players “did not!”

The “patriotically correct” card is so intimidating—used in high profile news “viewpoints” to demoralize reform hopefuls—that big numbers of lawmakers stepping-up to defiantly co sponsor H.R.40 is slow coming (thirty years after it was first introduced):

Incidentally, H.R.40 only pushes for a study of whether reparations are valid—and what modern compensation might look like—giving mere authorization to set an analysis into motion.

And a thing is sure—opposition is guaranteed to specifically “revive” inflammatory, typical divide-and-conquer with nontruths.

Vast American social advancement has given “all” Black Americans total access to the “American Dream.”

Only native Afro-Americans are qualified to address this issue—not immigrant Blacks.

Today’s “progress” is proof Blacks only want a handout—rationalizing yet another of slavery’s age-old promoted stereotypes—and that Blacks should be pulling themselves up by bootstraps.

And governors hiding behind “white guilt” will say:

It’s literally not their fault: that those Afro-Americans should be helping each other instead of killing each other (Black-on-Black crimes visibly shooting through the roof). 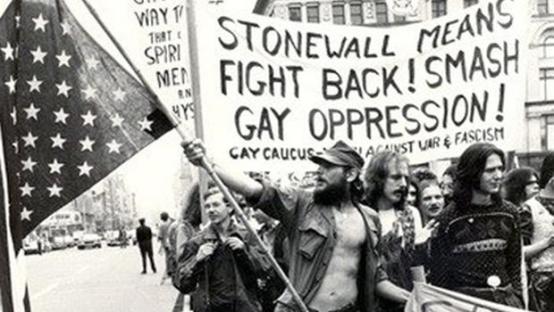 June, 2019, marks the 50th anniversary of New York City’s famous Stonewall Riots. In 1969 at the Stonewall Inn whites joined the Black and Puerto Rican LGBTQ spectrum pushing back against the corrupt police force that had viciously harassed them with impunity.

And what about this group: the LGBTQ mainstream—driven by white gay males?

Even though masses of gregarious San Francisco white gay males throw a fly in its own persecution ointment:

Seemingly oblivious these white gay men imitate typical national white reaction—ignoring racist acts against Blacks. Too many easily brush-off that dizzying LGBTQ burden of being under civic attack while others cannot; these revelers (unlike “rebels”) merely self-detach to keep heads clouded in frivolous privilege—traipsing along content to celebrate white male self-indulgence.

Given that odd mixture I ask: could LGBTQ Extermination Reparations be sellable? And what about this community’s still desperately needed national Civil Rights Bill that currently shows no light on the horizon?

2nd February 1964: Unapologetically gay Civil Rights activist Bayard Rustin, the major architect of the 1963 March on Washington and advisor to every major Civil Rights activist of his time. Popular Black leaders tried to have Rustin ousted, but Dr. King refused. Here Rustin, spokesman for the Citywide Committee for Integration, talks on the phone at the organization’s headquarters at Silcam Presbyterian Church, Brooklyn, New York. (Photo by Patrick A. Burns/New York Times Co./Getty Images)

Should Southern Black Baptists offer reparations (or at least a “truth and reconcilliation” proceedure) for their tragically successful campaigs—brutalizing their very own cultural “dependents?”

Keep it here readers! I’m tackling all of these fiery issues—and we do need to hear from you!

It’s sizzling here in San Francisco—but it’s about to get hotter! 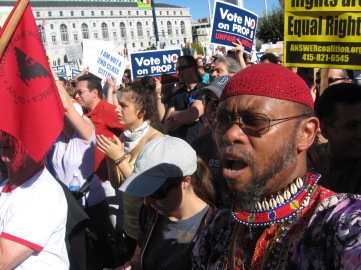